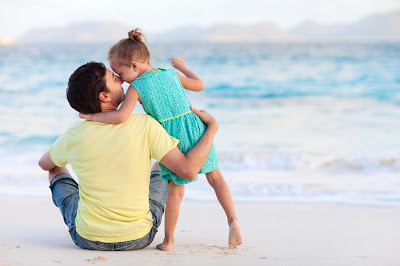 Our little girl is on the cusp of turning 5. Sounds like a milestone being crossed, doesn't it? For Baani, it surely is a big day in her life. She will get, among other presents (that she doesn't really care for much right now), her 14th Barbie doll. Or maybe 13th, I am not sure. But the important thing is - it will be a Barbie doll. She's excited about the party and her dress and her friends. But I think, she wouldn't miss them all that much as long she celebrates her birthday with her singing Barbie!

Sometimes it crosses my mind how simple children are. Despite all their wants and more wants, it really does not take much to satisfy a child. The desire for material things is an acquired characteristic which, I believe, stems from their surroundings and people around. The truth however, is that they can be so happy with so little, that you and I would be surprised. How can something so basic create so much joy in anyone?

I had a long day yesterday. It started with a hardcore workout at the gym, followed by a hearty conversation over lunch with couple of friends, followed by several hours spent on my laptop, followed by a drive back home through some thick evening traffic. I have realised that rains in Mumbai have a deeper psychological impact than a physical one. Everyone assumes that everyone else will leave early from work today. Hence, everyone leaves early and there are traffic snarls on most roads even in the late afternoon. I preferred not to be wise (but wiser!) and decided to step out a little late. Turned out, Mr. Murphy saw through my little plan and made me spend couple of hours on road anyway!

Eventually, I did get home, fatigued from the travel, only to find that Suni wasn't keeping well. She had had a tummy ache earlier in the day that had gradually deteriorated to a point where she went to bed early, without dinner. Baani had come from her evening play-time a while back and was hungry. Suni took a pill and hit the sack, while I heated the dinner for two. So, last night, Baani and I had dinner together. Just the two of us.

I put the program on pause mode with the remote and turned to look at her, "Sure honey, what do you want to do?"

With eyes bigger than any I have seen, heavy with anticipation, she said, very slowly and coyly, "Daddy, will you play with me and my friends for a while? Polly and Molly."

"Yes.. see, there they are. (she pointed to a place on the couch in the living room). They are having dinner too. But they are almost done. When they finish dessert, then they will join us."

I looked at Polly and Molly. Two cloth dolls (one blonde and one red-haired), poised demurely on two cushions and staring back expectantly at me. I looked back at Baani and said meekly, "Sure, we all shall play after dinner, darling."

Her face lit up with a glowing smile as she resumed her dinner. Polly and Molly continued to look at me while I went back to looking at Charlie the tramp.

Couple of minutes later, with the last of her spoonful of rice gobbled up (quite in a hurry, I thought) Baani asked me again, "Daddy, are you done?"


"No darling, another five minutes and I should be", I said, intently watching Charlie twisted into the teeth of a very large machinery in the black-and-white classic - Modern Times.

Slightly annoyed at the repeated interruption, I turned to look at Baani disapprovingly. What I saw instead was a much more disapproving Baani staring angrily at me, her hands tightly crossed across her chest.

"Is this how long you take to eat dinner, huh? It's been so long so since I have finished and you are busy watching TV and not eating!"

I felt a strong sense of deja vu. I had heard this comment before! It is how Suni or I scold Baani almost every night at dinner. Ooops!

The tirade continued, "Now.. you will take ages to finish your dinner. And then it will be time for Polly and Molly and me to go to bed. When will you play with us then? No, Daddy! Please eat your dinner quickly. We are waiting for you. I am going to wash my hands. You should be ready to play with us by the time I am back.". With that, she got up, signalling a definitive end to the monologue and stormed to the bathroom.

When she came back (after playing with the tap water for a considerably long time), I was done with my dinner and was chatting up with Polly and Molly. This time, Baani's face beamed with an even larger smile. I excused myself and quickly checked on Suni. She was fast asleep. Am glad, I thought, at least she's able to sleep peacefully after a really hard day with the stomach cramps.

Shutting the door quietly behind me, I joined Baani and her two girl-friends in playing.

We played quite a bit last night and had a lot of fun, laughing crazy and cracking silly jokes that no one else could possibly get. Sometimes, even I didn't get them. But they surely had Baani and Polly and Molly in splits. Baani told me that Molly is a huge fan of the kiddie cult movie 'Frozen' and that Polly loves heavy-duty EDM. Baani threw her voice for Molly and I did for Polly.

Both dolls boogie-woogied to 'Let it go' from the film and some serious heavy metal (courtesy me :)). Frankly, I thought it seemed a bit freaky at times, but Baani was ROTFL most of the time! All in all, the four of us got along like a house on fire :) It was an amazing way to end a long day and by the end of it, I felt quite refreshed!

Finally, being Daddy, I told Baani we would call it a day at 11PM. She agreed readily but asked for just 'one more little thing'.

"Daddy, can you read us Puss-in-Boots? Polly and Molly love little kittens and they have NEVER heard the story". She put Polly and Molly neatly on the cushions, facing me, and covered them with a little cotton towel (so they don't feel cold at night). Then she snuggled cozily into my lap. How can someone refuse so much cuteness?

So, I read Puss-in-Boots to the 3 girls. The evergreen story of the smart village kitten who strutted around town in leather  boots, impressed the King of the land, got his young and benevolent master married to the Princess to become Prince and spent his entire life with his master, in luxury in the large castle that he had wrestled from the Ogre through his canniness.

"And.. that is how Puss-in-Boots came to spend the rest of his days. The End... That is it, girls. The story of little Puss-in-Boots for you.", I ended as I closed the book.

There was no response. Baani was fast asleep on my lap. I am guessing Polly and Molly were too (they mirror whatever Baani does, as she claims). Though their eyes were open, with that constant smile across their fair, cotton-puffed faces.

Gently lifting Baani in my arms, I walked to her bedroom. Laying her on the bed, I covered her with the quilt and switched on the fan. I put down Polly and Molly next to her and covered them with part of the quilt too. Without opening her eyes, Baani turned on her side and said softly, "Goodnight Daddy. Good night Polly. Goodnight Molly."

"Goodnight sweetheart", I gave a soft peck on her cheek. Putting the light out, I left the door slightly ajar and tip-toed out of the room.


Want to know more about what your kid would really love you to do? Try this article: http://www.lifehack.org/articles/featured/the-top-10-things-children-really-want-their-parents-to-do-with-them.html

Rito
Hi. I am The Dad. My little girl is The Quick. But I am sure you already figured that out! This blog is about the adventures that play out every moment in a father's life. We fathers, are all regular Clark Kents. Only our kids can see the Superman inside. And what an amazing feeling that is :) Do write in if you would like to say something or contribute or simply have a view on my posts. I would love to hear from and chat with you. And if you are a Mummy, I am even more eager to learn from you! Being a great Dad comes naturally to all Mummies ;) Haha.. That was me being cheeky! Happy reading.